2017’s ‘Just Say No To The Psycho Right-Wing Capitalist Fascist Industrial Death Machine’ represents a hitherto uncharted level of antagonism and adversarial force for the band - an artistic statement as righteous, fervent and direct as its title.

which far from being an echo of an anarcho spirit of yore, denotes a record firmly entrenched in the psychic terrain of 2017 and now furthermore into 201 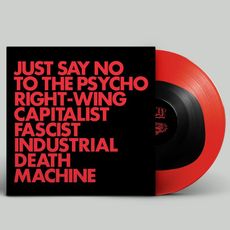