This new album is a great follower to their last album „Made in the Machine“, which was very much in the electronicrock direction.

„Science Fiction“ is a even more electronic album, the songs are shorter but supercatchy. Over the years Sun Dial's catalogue has been in demand for various film and television soundtracks such as the acclaimed horror film 'Helen Alone' and documentaries on the history of the CIA/Vietnam/MK ULTRA. Of special interest to the band has been the music of Sci Fi and Space on celluloid such as 'THX 1138', '2001; A Space Odyssey' and 'Blade Runner'. Now, in a project spanning more than 20 years, Sun Dial have fulfilled a long term plan to release a collection of unreleased Space themed soundtracks. This special collection is a very important landmark for the band and it sits perfectly with the ethos of Sulatron Records. 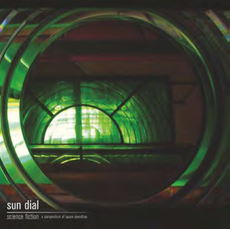