fEATURING 22 PREVIOUSLY UNRELEASED RECORDINGS ALSO INCLUDING KIRK BRANDON’S ‘STONE IN THE RAIN’, RELEASED OUTSIDE OF THE UK AS A THEATRE OF HATE ALBUM. COMPILED AND CURATED BY THEATRE OF HATE, AND FEATURING A BRAND NEW INTERVIEW WITH KIRK BRANDON SLEEVENOTES AND KIRK BRANDON INTERVIEW BY MOJO’S PAT GILBERT. Theatre of Hate burned briefly but brightly during the first couple of years of the 1980s, leaving behind the seminal ‘Westworld’ album, a handful of highly regarded Peel sessions and independent hit singles and a then-unreleased second album, ‘Aria Of The Devil’. ‘Omens’ brings together those classic recordings alongside main man Kirk Brandon’s ‘Stone In The Rain’ album (recorded by Brandon and fellow Theatre Of Hate man Stan Stammers and issued in the US as a Theatre Of Hate album), and ‘Yonjuuichi’, a band-curated collection of more recent sessions and versions, bringing the Theatre Of Hate story into the present day. Featuring a revealing and exclusive interview with Kirk Brandon, previously unreleased material and brand new remastering of familiar classics by the band’s personally selected mastering engineer, ‘Omens’ sheds new light on well-known material, re-introduces fans to the lesserknown ‘Aria Of The Devil’ and ‘Stone In The Rain’ albums and offers a taste of Theatre Of Hate’s adventures in the new Millennium. Beautifully packaged and thoughtfully curated, ‘Omens’ is a must-have for any fan of Theatre Of Hate and a perfect introduction for anybody who has been meaning to explore the band’s work for the past 40 years. 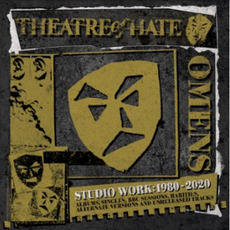