Beneath the technical flash, the fury, the fearless creative brinkmanship of the first two Mars Volta albums lay a potent seam of the blues, an existential vexation that powered every twist and turn of Omar and Cedric’s imaginations.

That mournful vibe would come to the surface of the group’s third full-length Amputechture, a simmering/blistering set that was unquestionably the group’s darkest yet. There was no overarching theme here, no interlinking concept binding the songs together, though Cedric concedes that, lyrically, the album was influenced “by a lot of stuff I was going through, a really bad break-up and a lot of other crazy stuff, and trying to put that feeling into the record.” But Amputechture – its name another of the late Jeremy Michael Ward’s invented words – was no downbeat bummer. Opener Vicarious Atonement might’ve been a deliciously gloomy, slow-burning thing, capturing Cedric in delirious duet with Omar’s swooning guitar lines, accompanied by squalling saxophone by Adrian Terrazas-Gonzales and dream-frequency fuckery by the group’s new sonic manipulator, former At The Drive- In member Paul Hinojos. But second track Tetragrammaton swiftly set pulses racing, an epic-in-miniature and containing more ideas within its 16 minutes than most bands manage over an entire career, its proggy, complex guitar figures tessellating in infinite configurations and converging as if conforming to mathematical formulae from another reality. The raw material Amputechture was hewn from started life on the road. Omar now travelled with his own mobile recording studio – a little Neve ten-channel tape recorder and an array of microphones – and was able to work on new ideas on tourbuses, in hotel rooms and during soundcheck (and, occasionally, after the show was done). After touring for Frances The Mute was complete, Omar relocated to Amsterdam, staying with his photographer friend Danielle Van Ark and her partner, Nils Post. It’s here that he demoed Amputechture, flying in engineer Jon DeBaun, drummer Jon Theodore and his brother, Chino, to work on these raw sketches. He later returned to Los Angeles, where the album was finally recorded. Omar ceded guitar duties to his dear friend and kindred spirit John Frusciante, instead assuming the role of musical director. “I wanted to hear the sound of the band,” he says. “I thought, I’ll be able to sit at the console, feel the air of the speakers moving, the unified sound of everything, and not feel distant from it. It was fun, but it was also challenging.” Part of Omar’s new method was to teach the musicians their parts only moments before the tapes rolled. “To keep things fresh, and to keep everyone on edge,” he says, before chuckling. “No, not on edge – on their toes. Amputechture would prove The Mars Volta’s most diverse set yet, drawing into the group’s tornado of influences moments of fiery jazz spirituality and esoteric folk introspection, finding space for passages of devastating subtlety and also their most fierce and full-on moments to date. The aforementioned Vicarious Atonement found its meditative mood echoed by Asilos Magdalena, an intimate, acoustic piece that invoked traditional Latin folk music, as Cedric sang in Spanish a sorrowful tale of a lost soul’s quest for sanctuary within a Magdalen Asylum, a refuge set up by the Catholic church for “fallen women”. The shadowy, sinister closer El Ciervo Vulnerado, meanwhile, tapped into the darker side of spiritual jazz to further explore the album’s themes of redemption and religious myth and magick. Elsewhere, the interplay between guitar and clarinet on Viscera Eyes created complex, unsettling counter-melodies, while the coiling, ornate Meccamputechture – Cedric’s wild fusion of sacred texts, occultism and dystopian science fiction – proved a great showcase for Ikey Owens’ swarming, infernal organ runs, in concert with Frusciante’s arcane guitar-play. But it was Day Of The Baphomets that would prove Amputechture’s most ambitious and most defining epic. Cedric’s lyrics tore into the hypocrisy of religious cant and myths of sin and punishment. “I wanted to make a song that was like the movie The Believers, where this cabal stole kids and did some occult shit with them,” he explains. “But I wanted it to be like, ‘What if the people you hire to do jobs you don’t wanna do rise up one day and then pull some shit like that?’ Like it was the guerrilla warfare, them taking over – wouldn’t that be some fucked up shit? And the music just lent itself to that – the big intro, the bass solo, and all of the ruckus that occurs.” That ruckus was some of the most thrilling Mars Volta music yet, as Omar directed his musicians to rumble through fiery modes of wild tribal groove, ransack-the-palaces riot- rock and supreme progressive experimentalism. Amputechture, then, is the sound of The Mars Volta in imperial mode: fearless, insatiable, unstoppable. 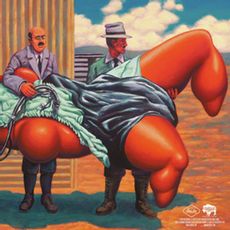