An exclusive look into the life of the most successful British musician most people have never heard of - this is Steven Wilson as he has never been seen before.

The more I thought about it, the more I realised my career has been unusual. How did I manage to do everything wrong but still end up on the front cover of magazines, headlining world tours and achieving Top Five albums? How did I attract such obsessive and fanatical fans, many of whom take everything I do or say very personally, which is simultaneously flattering but can also be tremendously frustrating? Even this I somehow cultivated without somehow meaning to. This is my accidental career. Limited Edition of One is unlike any other music book you will ever have read. Part the long-awaited memoir of Steven Wilson: whose celebrated band Porcupine Tree began as teenage fiction before unintentionally evolving into a reality that encompassed Grammy-nominated records and sold-out shows around the world, before he set out for an even more successful solo career. Part the story of a twenty-first century artist who achieved chart-topping mainstream success without ever becoming part of the mainstream. From Abba to Stockhausen, via a collection of conversations and thought pieces on the art of listening, the rules of collaboration, lists of lists, personal stories, professional adventurism (including food, film, TV, modern art), old school rock stardom, how to negotiate an obsessive fanbase and survive on social media, to dream-fever storytelling. 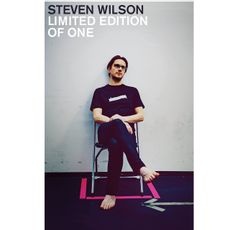