Smoke Ring For My Halo

let’s not faff around - this album is the dog’s... well, you know what.

whereas on his previous projects in his band the war on drugs or 2009’s ‘childish prodigy’ there have been hints of springsteen-esque rocking out, this album focuses on his more acoustic ruminations & it’s a wonderful set of slacker-folk tinged songs that swell & shine the more you listen. ‘baby’s arms’ is a misty eyed far away paean to love that remains heartfelt but rock steady with backing by meg baird. ‘on tour’ sees vile’s chord progression fleshed out with piano by blues control’s lea cho & is subtley lyrical in its tale of inter band pressure whilst on the road, ‘society is my friend’ borrows some choice ringing keyboards from tusk-era fleetwood mac, whilst ‘runners up’ uses his laid back vocal drawl to great effect. ‘smoke ring for my halo’ gives vile the platform he needs to be appreciated as an awesome songwriter – unpretentious, unflinching & unrelenting in quality with a great grasp of melody, space & delivery. recommended. “fast growing in stature” 4/5 – uncut, ‘a meditative set of hypnotic pop with a folk rock heart” 4/5 – mojo, “electrifying” 8/10 – nme. 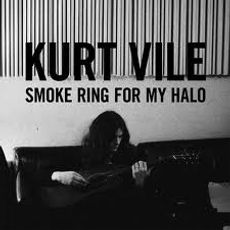