Over two drone-afflicted tracks, this album harkens back to the moods explored and perfected in the drone masterpiece, Soliluquoy For Lilith. But rather than falling further down the endless spiral of Lilith, Opium Cabaret functions as a distorted simulation of a familiar experience.The loud, colourful, and psychedelic album cover (with NWW’s signature collage work) seems fitting enough to represent a cabaret themed event. Although, a step inside reveals that the sounds present are a distant inebriated haze from any kind of conventional performance. This is a record that moves in slow motion. It unfolds into a floating nothingness to appease broken minds so drenched in opiates, time and place are but frivolous footnotes in a wider narrative of distorted reality. More than his other recent works, Stapleton’s latest effort hits a similar note to that of his ‘80s output. Speaking of this era, as the surviving acts from England’s esoteric underground of industrial stalwarts get fewer and fewer, the importance of new Nurse With Wound music cannot be understated. 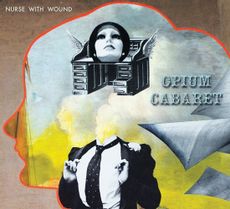