The Fall’s second studio album, re-issued as a limited splatter vinyl LP with 7” single replica of their ‘Rowche Rumble’ 45.

Originally released through record label Step-Forward, it predicated two major factors in the group’s career – high productivity and high group turnover. The album has historically garnered excellent reviews, including 4/5 in MOJO, 8.7/10 on Pitchfork and 4/5 in Q magazine. Featuring the one and only Mark E Smith alongside Steve Hanley (bass), Marc Riley (guitar), Craig Scanlon (guitar), Mike Leigh (drums), Kay Carroll (backing vocals) and Yvonne Pawlett (keyboards). The black and white splatter vinyl version is 180GSM with an inner bag and features a replica of 7” single ‘Rowche Rumble’ c/w ‘In My Area’. Founded by its only constant member, Mark E Smith, The Fall formed in Manchester in 1976 and were one of the most prominent post-punk groups in the world. Musically, there may have been several stylistic changes over the years, but it was often characterised by an abrasive guitar-driven sound and frequent use of repetition, always underpinned by Smith’s distinctive vocals and often cryptic lyrics. 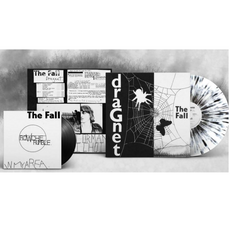