This was all recorded in Wild Willy Barretts home studio and features a host of home made instrumants including his Electric Thumbless guitar, the Wah Wah Wheelie Bin and an old boot with a screwed on tambourine! Listen and wonder, miss it at your peril! The album is just one part of an ongoing project, mixing Willy's uniquely experimental music with his uniquely experimental woodwork! Willy will support the release with live performances at selected RSD stores, so check for details! 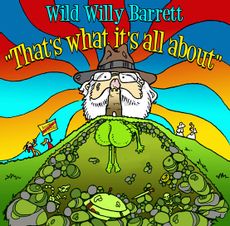