the definitive history of scottish post-punk.

the special edition includes a 7 inch vinyl single featuring the first Josef K release on Postcard (Radio Drill Time) on one side, and a track (Everything’s Roses) from the debut release by Fire Engines on their Codex Communication label on the other side. The immense cultural contribution made by two maverick Scottish independent music labels, Fast Product and Postcard, cannot be underestimated. Bob Last and Hilary Morrison in Edinburgh, followed by Alan Horne and Edwyn Collins in Glasgow helped to create a confidence in being Scottish that hitherto had not existed in pop music (or the arts in general in Scotland). Their fierce independent spirit stamped a mark of quality and intelligence on everything they achieved, as did their role in the emergence of regional independent labels and cultural agitators, such as Rough Trade, Factory and Zoo. Hungry Beat is a definitive oral history of these labels and the Scottish post-punk period. Covering the period 1977-1984, the book begins with the Subway Sect and the Slits performance on the White Riot tour in Edinburgh and takes us through to Bob Last shepherding the Human League from experimental electronic artists on Fast Product to their triumphant number one single in the UK and USA, Don’t You Want Me. Largely built on interviews for Grant McPhee’s Big Gold Dream film with Last, Hilary Morrison, Paul Morley and members of The Human League, Scars, The Mekons, Fire Engines, Josef K, Aztec Camera, The Go-Betweens and The Bluebells, Hungry Beat offers a comprehensive overview of one of the most important periods of Scottish cultural output and the two labels that changed the landscape of British music. Douglas MacIntyre, Grant McPhee and Neil Cooper said: ‘Hungry Beat is a story about place and time. Everyone involved in the Fast Product and Postcard movements were sparked into creative life by punk, but quickly moved beyond. This book features the active participants telling the story in their own words, a story in which the central characters were Edinburgh and Glasgow. The labels and artists helped define the essence of both independent culture and mass-market entryism – the records were letters. It is also a blueprint to make you believe you can achieve something from humble beginnings in a bedroom, and proof that shows you can achieve something no matter where you come from. You don't need to have a number one hit or success, you just have to cut through the dissent and mediocracy to make your mark. Bob, Hilary, Alan and Edwyn will tell you how.’ Lee Brackstone said: ‘Some legendary pop culture stories only make sense when you hear the voices and can measure the contradictory accounts of the maverick players themselves on the page. Hungry Beat assembles the casts of Postcard and Fast Product under one roof to tell the story of Scottish postpunk in Glasgow and Edinburgh respectively. A much mythologised moment of bands like Fire Engines, Josef K and Orange Juice, whose legacy has accumulated staggering influence over the decades, Hungry Beat is a funny and inspiring masterclass in entrepreneurial anarchy and sheer bloody-mindedness, that will stand alongside the classic oral histories as a consummate example of how to do it, DIY style.’ Douglas MacIntyre was a key part of the Scottish postpunk scene and since 1994 has operated the Creeping Bent Organisation, the Scottish independent label viewed as a successor to Fast Product and Postcard. Grant McPhee is director of the film, Big Gold Dream, interviews for which have been revisited to partly contribute to the book. Neil Cooper is an arts journalist and has chronicled Scottish postpunk manoeuvres. 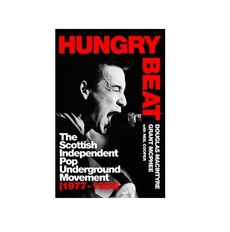