originally released in 1997, this record was the full length debut release from Austrian Christian Fennesz, following the twitching drone as found on the 1995 EP Instrument, which is also included in this deluxe 2LP reissue.

Once launched, Hotel Paral.lel was to instigate a sublime exploration of a wide variety of forms, from formal abstraction to shimmering drone around to ground zero glitch pop. Recorded just before mobile computing devices became omnipresent it was an investigation into the sonic possibilities residing in guitar based digital music. Sz launches the career with a constantly buzzing sound that resembles a fax machine encountering a G3 laptop for the first time, realising the game is up. Nebenraum is the first foray into the style for which one would attribute to Fennesz. A glacial drone unexpectedly morphs into a gorgeous melody and microscopic groove. Adding pulse and melody was hearsay in the radical end of experimental music up until this point and with this single gesture, everything changed, for everyone. Blok M nails this trajectory home with a straight up 4/4 beat. Such rhythm also features on Fa with a euphoric mix of a thudding beat, sharp splinters of noise and a devastating exploding melody. Repetition plays heavily through this album as the hyper metronomic beat on traxdata lays a bed for all manner of buzzing electronics. On the closing "Aus" we see a glimpse of what was to come in the future works of Fennesz, an experiment in popping, bubbling pulse pop. A far more darker and experimental work than Fennesz' subsequent work. This is an exquisite radical field of freeform noise, sliced techno beats and subtle ambient texture all coming together to create a timeless work. There's little out there in the world of music, still to this day, that sounds remotely like Hotel Paral.lel. With a radical reinvention of music Hotel Paral.lel is an essential addition to collectors of pioneering music in the late 20th Century and sounds as enthralling today as it did to the shocked ears occupying 1997. 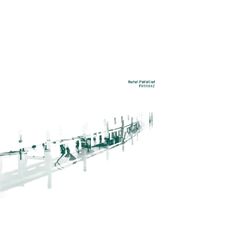