In this release we navigate the uncharted waters of Fairport Convention’s early voyages across the UK, European and American airwaves. 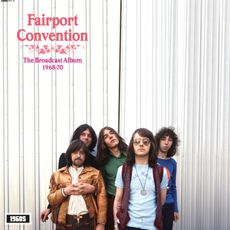