Swapping rose-tinted nostalgia for the green veneer of oxidised copper, Tallies advance their sonic chops from the obvious touch points, creating something sublime, entrancing, and braced with more than a little bombast.

With their brand-new sophomore album, Patina, Toronto-based indie pop band Tallies have found a way to expertly walk that razor-thin tightrope between nostalgia and the present, nodding to their favorite bands of the past while transforming their sound into something tight, bright, and undeniably fresh. The band’s 2019, debut self-titled album solidified the their stature as Canada’s leading dreampop scholars as its mix of upbeat pop hooks and heady, larger-than-life production won the band critical acclaim from the indie underground to the mainstream alike. They began work straight away on a second record, which would prove to be an even more life-affirming endeavour than their debut. It was during this process that Tallies began a working friendship with one of their musical heroes—Simon Raymonde, ex-Cocteau Twins bassist and founder of Bella Union, caught wind of Tallies and made it his mission to sign the band. Through transatlantic phone calls, Tallies were able to deeply connect with a member of one of their favourite bands. 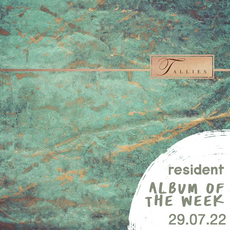