Hailing from Brooklyn, New York, Reid Paley is an acclaimed singer-songwriter known for his unique primal yet evocative vocal style and riotous songs.

After releasing his debut single ‘Time For You’ on Sub Pop in 1997, Paley teamed up with producer and Pixies mastermind Frank Black to record the album ‘Lucky’s Tune’. Accompanying himself with just his trusty 1955 Gretsch Archtop (through a 1965 Fender Super Reverb), Paley blasts through 13 songs including stand outs ‘Lazarus In Brooklyn’ and ‘If I Knew Then (What I Know Now)’. "What? You want some kind of description of the artist and his music? Just f*****g listen to the guy and enjoy his prowess.“ – Frank Black First released in 1998, the album is now finally issued on vinyl 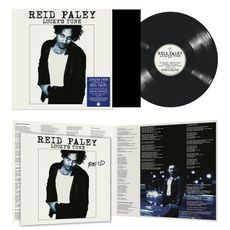