Just like its predecessor Spike (1989), Elvis Costello’s Mighty Like A Rose is an album that twists and turns in its stylistic delivery.

In addition, Costello collaborated once again with Mitchell Froom and Kevin Killen for the production and co-wrote two tracks alongside Paul McCartney; “So Like Candy” and “Playboy To A Man”. The album also features the single “The Other Side Of Summer” and peaked at #5 on the UK Albums Chart. 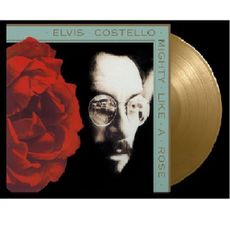