Oog Bogo are a four-piece rock band from Los Angeles and their new album is‘Plastic’, an electrifying set of songs and sounds that just don’t stop, working like amachine that makes joy and endless flips and repetitions, whether in front of theturntable or out in the real world. In the past several years, Oog Bogo dropped two records that previewed thisexplosion in wildly divergent ways: 2019’s ‘Oogbogo’ EP, with wigged-out production,its contorted fun house mirror images pulling punk, psych and new wave in and out offocus in a chaotic procession of mutant tunes. 2021’s ‘EP2’ radiates a starklydifferent vibe, as chilled-out guitar-pop tunes conjure a flowing medley of plaintiveechoes and atmospheres in a mellow mist of hiss. Kevin Boog recorded these records in a largely hermetic state: at home on 4-track,playing all the parts, slowly drawing out the sounds. The songs for ‘Plastic’ weredemoed this way too, as a starting point for a group interpretation - but when, forobvious reasons, logistics prevented everyone from getting in the same room to evenrehearse, the planned recording session at Ty Segall’s Harmonizer Studios took on adifferent shape. Starting off with only drummer Thomas Alvarez (Audacity) to accompany him, Kevinrealized that any obstacles to getting the record made were also opportunities, forsomething else that was also right to happen. Rather than reach for the design of thedemos, he kept himself in the present moment, approaching every passage as fluidlyas possible, playing what he needed to play, staying open to what he needed toknow. It didn’t hurt that the laptop with all his songs crashed right after he walked intothe studio! There was no way possible but forward. The direction was right on with the guys at Harmonizer - Ty Segall’s sense ofimagination made him the ideal production counterpart to walk together with Kevininto this world, psyched to experiment and ready to get weird at any time. Ty andengineer Matt Littlejohn met all requests and requirements in the form of sounds, withgear and approaches that amazed and delighted, and an eternally ebullient spirit. As this was Oog Bogo’s first time recording away from home, Kevin was a kid in acandy store - where the store owner turns out to be a Wonka-esque philanthropist.As band members Mike Kreibel (Dirty & His Fists) and Shelby Jacobson (ShannonLay) joined the session, there was a synchronicity and community with everyoneinvolved, finding an unexpected road to realizing the songs, with all the colours andhues they added making everything pop that much harder. Fluidity was key: ‘Plastic’’s tunes depict a polymorphic cast of characters. As in life,they leap avidly from style to style; from pretty psych rock to new wave apocalypsedisco and harsh post punk bleakness, sometimes in a verse and a half. Corkscrewingover and over like a riff-driven space-coaster, morphing in and out of eachsuccessive moment with increasing momentum and gravity, ‘Plastic’ defines andredefines Oog Bogo, with sweet tunes, barely-controlled intensity and sharpproduction moves - a killer first album and an equally killer evolving state of mind. 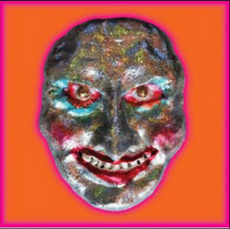