This rare and coveted 40th anniversary CD/DVD special collector’s edition gets a much needed repress after being out of print for nearly ten years.

Thick As A Brick came about following the release of Jethro Tull’s immensely successful previous album “Aqualung”. Upon its release, Aqualung was regarded a concept album in the music press, and in response the band set about to respond to the rock critics with the ultimate concept album, culminating in Thick As A Brick. Thick As A Brick was the first album to feature drummer Barrie Barlow, who featured alongside Ian Anderson, Martin Barre, John Evan and Jeffrey Hammond. contents: - New stereo and 5.1 mixes by Steven Wilson - Original 1972 recording at Morgan Studios by Robin Black The book contains: - The original newspaper rebuilt for the 12 x 12 format on 16 pages of newspaper style paper (but more durable). - The 2012 newspaper printed on gloss paper - An article by Classic Rocks’ Dom Lawson about ‘Thick As A Brick’ - An Ian Anderson interview conducted by The Reverend George Pitcher - Many rare 1972/73 photos from photographers Didi Zill and Robert Ellis covering ‘street’ and live situations and 2012 tour photos by Martin Webb. - Memories of the recording from engineer Robin Black. - Recording and touring memories from Martin Barre, Ian Anderson and Jeffrey Hammond. - A Q & A with tour manager Eric Brooks with tour memorabilia and the full 1972 itinerary. 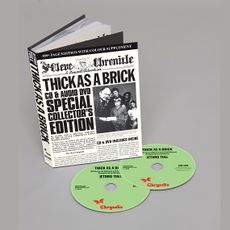