the other lives frontman's solo debut is a glorious record, as epic as it is intimate, distinguished by the same sweeping, cinematic arrangements and haunting, wistful melodies that typify the band’s catalogue, but with a rawer edge that reflects its’ home made origins.

“The album isn’t necessarily ‘western’ sounding; it’s more that, if I name something immediately, it sticks for me, so the album title stayed Cowboy Ballads.” The album’s ballads are represented by ‘New Love’, ‘Price In Full’, ‘Rituals II’ and the instrumentals ‘Italia Nite I’ and ‘Dread Harp Blues’, simmering episodes fit for a cowboy as he rides off into the sunset though few cowboys post the existential thoughts that Jesse does here. 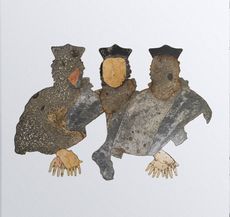