The Brooklyn band's sound includes elements of folk and swirling indie rock, with Berninger's literate, emotive tunes drawing heavily on the tradition of melancholic singer/songwriters. On "Daughters of the Soho Riots", Berninger's baritone croon recalls Gordon Lightfoot, yet his lyrics are incisive, confessional, and decidedly contemporary. The combination of surreal imagery and genuine pathos in "Baby, We'll Be Fine" (expressed in the song's repeated refrain) is also representative of Berninger's craft. Two pairs of brothers--Aaron and Bryce Dessner (guitars) and Scott and Bryan Devendorf (bass and drums, respectively)--keep things alternately chiming, churning, and appropriately atmospheric. The startling relationship sketch "Karen", for example, rides a light rock pulse dominated by piano and augmented by strings, making it one of the album's shining moments. "All the Wine" turns Berninger's usually dark self-exploration on its head with its semi-ironic self-aggrandisement. ALLIGATOR's 13 tracks testify to the National's standing as one of the more distinctive and absorbing bands around. "Buried in the richness of their music, there's a spare elegance unheard since The Triffids. …They feed an energy more residual than that of The Rapture or The Strokes" 5/5 - Uncut. 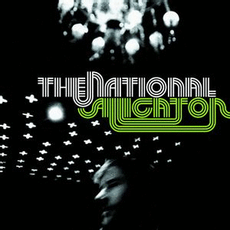