Back to the Woodlands & Where the Woods Begin


this release includes the lost album's contemporary 'Where the Woods Begin'.

Written and recorded between 1972 and 1982 in Western Oregon, Back to the Woodlands is a previously unreleased, and nearly lost, album made by Ernest Hood during the same era as his near mythical album Neighborhoods. A visionary combination of field recordings, zithers, and synthesizers, Back to the Woodlands offers an unprecedented depth of access to this singular artistic mind. Born into a musical family, Ernest Hood began a promising career as a jazz guitarist during the 1940s, touring internationally with his brother Bill Hood and the saxophonist Charlie Barnet, before contracting polio in his late twenties. The disease left Ernest unable to play the guitar and confined him to a wheelchair for the rest of his life. It also forced him to adapt and innovate around his musical practices in the face of adversity; Hood’s value of sound matured with a remarkably democratic and nonhierarchical approach and application. Taking up the zither, a less physically-demanding stringed instrument to the guitar, embarking upon the unprecedented process of incorporating field recordings into his work as early as 1956, and eventually discovering the synthesizer, Hood’s music became imbued with optimism and subtle cultural critique. This ethos and technique - refined over the coming decades - would lay the groundwork for a sprawling body of radio work, mail order recordings for homebound listeners, and Neighborhoods, self-issued as a small vinyl edition in 1975. Where Neighborhoods, a nostalgic opus, drawing from a well of collective memory of the 1950s, is defined by traces of human activity, Back to the Woodlands leaves the modern world behind, delving into Hood’s love for nature. Only recently discovered in his archives, the album dramatically expands his concept of “musical cinematography,” imagistically triggering states of sensory memory from within its zither and synthesizer melodies, intertwined with field recordings made during Hood’s extensive travels throughout Oregon. If Neighborhoods is a retreat into the gauzy joys of a romanticized past, Back to the Woodlands is an immersion in the timeless sanctuary of the natural world. A fascinating counterpoint to its predecessor, Back to the Woodlands brings us even closer to Hood’s belief in the transportive qualities of sound; that field recordings could serve as a vehicle for the imagination and liberation, particularly for those with similar mobile disabilities as his own. Across the album’s twelve compositions, the rippling instrumental harmonics - shifting between abstraction and playful melody - fold so seamlessly into the birdsong, bubbling brooks, and other environmental ambiences, that they often give the impression of having been recording within the landscapes toward which they whisper. Falling somewhere between the immersive calm of healing music and New Age, the creative field recording practices of sound ecologists world building for Folkways, and the jazz infected ambiences during Obscure / Editions EG’s highest heights, Back to the Woodlands sculpts an singular proximity of music for its moment; a form of ambient sonic realism that draws the consciousness toward its surroundings as much as within. Working closely with his estate to maintain his original vision, Freedom to Spend has restored and remastered this never before released, lost masterpiece by Ernest Hood from the original tapes. 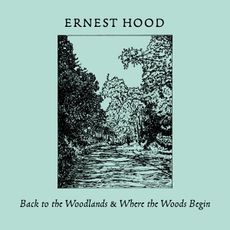