In the 20th year of Sula Bassana's career a new album is showing up! It contains songs composed and recorded from 2013 to 2018, but finished at a few evenings within the last years.

After some more electronic orientated albums, this one here is more in the style of the rock orientated albums like Dreamer, The Night, Dark Days or Live At Roadburn 2014. First two tracks include some vocals, which is rare on Sula albums, and show the more rockier side of this album. The titletrack is something different, very melodic, even slightly jazzy, and features Mellotron and some pure fuzz. Wurmloch is a full space flight based on a synthesizer arpeggio with the rest recorded around later. And the album ends with the oldest of these tracks: Mellotraum. This was the first track Sula recorded with his freshly arrived Mellotron (4000d) on it's first day, back in 2013. Btw: Sula Bassana is Dave Schmidt, a multi instrumentalist from Germany, playing in Zone Six and Interkosmos (and has played in Electric Moon, Psychedelic Monsterjam, Krautzone, Weltraumstaunen, Liquid Visions, Growing Seeds etc.). All music composed, performed, recorded, produced and mixed by Sula Bassana (Dave Schmidt) at his Amöbenklangraum. Music recorded between 2013 and 2018. Last overdubs and vocals recorded in 2019 to 2021. Sula plays guitars, basses, drums, synthesizers, organ, Mellotron and electric sitar. And did some vocals in tracks 1 and 2. 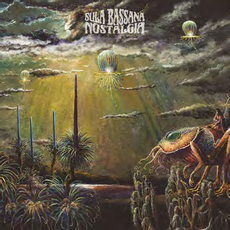