Self-avowed synaesthesiac, Cate Brooks conjures a very visual fantasy in four acts (the vinyl version across four sides of a luxurious gatefold double 10”). Her tracks evoke human dramas played out against the timeless backdrop of a utopian built environment, where leisure, luxury, elegance and romance are always in fashion. Brooks' music is by turns ambient, dramatic, upbeat and melancholic. It's instrumental electronica of the very highest calibre, an expert and masterly manipulation of electronic equipment both old and new. Light touches of acoustic and electric instrumentation and flourishes of both tape and digital sound manipulation add colour throughout. This long running solo project is saturated in 70s and 80s TV and library music influences, and in some ways Full Circle is a call back to the 2005 debut EP Mind How You Go. However, the music and production have evolved over the yers, into a distinctively rich and three dimensional soundworld. The album wears its influences and sonic components proudly, but feels contemporary, cool, and fresh. Brooks' music career predates and now transcends the world of hauntological electronica that it inspired. 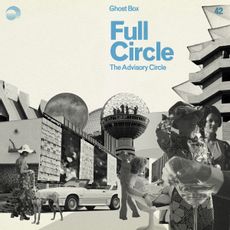