The The fronted by Matt Johnson Including the singles “Uncertain Smile”, “perfect" and the iconic “This Is The Day”, the album, which is Gold certified in the UK, has been long out of print on vinyl, except as part of a limited run 30 th anniversary 2 LP boxset reissue in 2014 Featuring a host of talented musicians, including JG Thirwell (aka Foetus Manorexia and Steroid Maximus), Zeke Manyika (Orange Juice), electronic DIY pioneer Thomas Leer and Jools Holland, Matt Johnson set out with a clear vision in mind to produce an album that felt cinematic a record of width, depth and texture and one which avoided the mundane line up of two guitars, bass and drums Lauded with critical acclaim (“Soul Mining is a brilliant and very idiosyncratic album” The Guardian "Like shaving lotion applied to cleanse a wound, Johnson’s songs are attractively scented and sting like hell” Melody Maker) the music and lyrics of ‘Soul Mining’ are as fresh and relevant today as they were almost 40 years ago SIDE 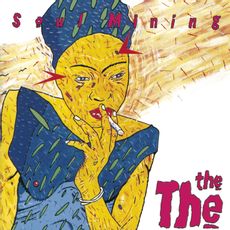