To mark 30 years since the original release of the single “When You Gonna Learn?”, Jamiroquai are reissuing ‘Emergency On Planet Earth’ which signifies the beginning of the 30th anniversary celebration for one of the UK’s most groundbreaking and pioneering bands of recent times.

Following the reissue in January of the 25th anniversary edition of ‘Travelling Without Moving’ - the best selling funk album of all time - Jamiroquai’s debut album ‘Emergency On Planet Earth’, is this year celebrating its 30th anniversary and is being reissued as a transparent/clear coloured double vinyl with gatefold cover and printed inner sleeves containing liner notes by Jay Kay from 2013 and 2017. The album's original liner notes were a manifesto by Jay Kay regarding the environment, upon its original release these subjects were not on the mainstream agenda. But now, with the benefit of hindsight, this record feels as important and relevant, if not more so, than it was on its original release. Originally released in 1993 (the album's lead single ‘When You Gonna Learn’ was released 19 October 1992), the album was met with critical acclaim and charted at number one. To date ‘Emergency On Planet Earth’ has been certified multi-platinum selling in excess of 3 million copies globally. 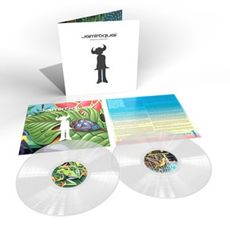