As Chicago’s leading independent label for a couple of decades, Chess Records was known for its massive catalogue of blues, R&B, doo‐wop, rock and roll, jazz, and soul hits.

Rockabilly and white rock and roll output, not so much. Yet Chess and its subsidiaries Checker and Argo did indeed issue plenty of killer rockers along those lines—as Bear Family’s second excavation of those labels’ vaults attests. Sure, the the better‐known musicians like the prolific Bobby Charles and Dale Hawkins are here. But the emphasis is on more obscure delights by Dick Glasser, Bobby Dean, Bette Laine, and The Galaxies. There’s a taste of high‐stepping country from Jack Ford, highly infectious southern rock and roll by Steve Alaimo, Rod Bernard, and Freddie Fender, and a wee bit of tough R&B from Bobby Tuggle, Big Al Downing, and Billy Miranda, whose Run Rose gives Little Richard a run in the torrid department. Like its Bear Family predecessor BCD16123 (Vol. 10 in the ‘That’ll Flat…Git It!’ Series) which is also available, this collection should precipitate a reassessment of the mighty Chess Records legacy: it really was a full‐service roots music label. See You Soon Baboon! 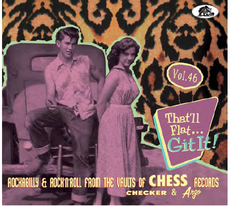