Originally released in October 1981, Ultravox's 'Rage In Eden' album was the second to feature Midge Ure on vocals.

Like their previous album, Vienna, this album was produced by Conny Plank (Neu!, Kraftwerk) and featured the hits The Voice and The Thin Wall. This exclusive RSD release contains the 2022 Stereo Mix of the album by awardwinning musician/ producer Steven Wilson. Taken from the recently released deluxe edition of the album and making its vinyl debut here, it also includes a Previously Unreleased Instrumental version of Steven Wilson's mix of the album. 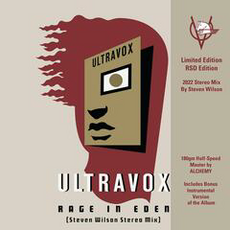