Arguably one of the best live albums of all time, Live and Dangerous was recorded in London and Toronto in 1977, during the tours accompanying the albums Johnny the Fox and Bad Reputation.

Live and Dangerous was originally intended to be a studio album. Working with producer Tony Visconti, Thin Lizzy had had huge success with their previous album Bad Reputation, and the group wanted to work with him again. But since Visconti had a very tight schedule Phil Lynott came up with the idea that they spend two weeks together compiling a live album instead. This box set is the definitive version of the album, containing all the shows that make up the record newly mixed by Ben Findlay from the original multi-tracks, mastered by Andy Pearce and overseen by Guitarist Scott Gorham. It goes to dispel the rumours that the album was extensively overdubbed in the studio and its presented here as the shows were intended with the rawness of a band, they were at the top of their game night after night. The package is rounded off with sleeve notes by mojo’s Mark Blake and has a booklet packed with rare photos and memorabilia. 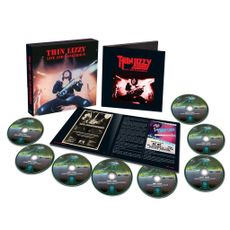