OUR HOUSE ON THE HILL (10th anniversary edition)


After their first full-length album on Shrimper, a demos EP on New Images and scores of singles on domestic and international record labels, The Babies’ second album Our House on the Hill is their Woodsist debut and the first with new bassist Brian Schleyer.

While the band was originally conceived as a side-project outlet for Kevin Morby and Cassie Ramone—along with drummer Justin Sullivan—to trade song ideas and play house parties, the project grew into a full-time affair. The Babies spent much of 2011 touring the US and abroad, all the while writing new material, both in their home of Brooklyn and during a two-month sojourn in Los Angeles. In February 2012, the band swapped their usual environs of Brooklyn’s Rear House recording studio and spent two weeks in Los Angeles working with producer Rob Barbato (Darker My Love, The Fall, Cass McCombs). The increased time and focus allowed them to explore musical directions only hinted at on their first album. Our House on the Hill features hushed dirges, melancholic traveling odes and squealing rave-ups, all made cohesive by Morby’s and Ramone’s captivating songwriting and lyrical themes. Organ, piano, saxophone and even strings enhance the aural atmosphere, which finds the band finally realizing a sound that can be called their own. Simple yet thoughtful; familiar yet haunting. Sweet but somber. “… married throughout the entire record are those otherworldly harmonized ‘oohs’ and ‘aahs’ by Kevin and Cassie that’ll make the stubble on your spine take notice if you are still one of them folks in need of oxygen to breathe. The switchblade knives and butterfly stitches that paint the heartache and conflict throughout this long-player will sharpen you for your next lovelorn argument, stumbling bar-brawl between you and a reflection of your 17-year-old self in the face of a tinfoil-plated locket or for the working stiffs, that 3 A.M. Saturday drive home from the bad side of the tracks back to the sad side.” —Dennis Callaci • Sophomore full-length from Brooklyn band lead by Kevin Morby (Woods) and Cassie Ramone (Vivian Girls) • Recorded in Los Angeles with producer Rob Barbato (Darker My Love, The Fall, Cass McCombs) 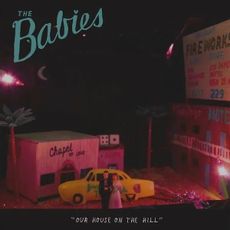