released in 2001, this lp was the starting point for the critically praised hard rockers’ blend of heavy riffs with dreamy guitar fuzz.

in dead meadow's universe, the wah-wah pedal is just as important as the guitar itself, with guitarist jason simon displaying a subtle but nevertheless formidable control of tone & feedback, creating a hypnotic wash of sound akin to a softcore hendrix. the beautifully chiming notes of ‘dragonfly’ & the stunning, eyes-closed, head-swaying vertigo induced by ‘greensky greenlake’ merely set the stage for the album's central tour de force, the sublime, lazy epic ‘beyond the fields we know.’ over its 9 minute swirl, the song's swimming waves of lysergic grooves qualify it as the direct offspring of led zeppelin's ‘no quarter’. ‘rocky mountain high’ draws the record to a close with one of its heaviest, darkest moments. 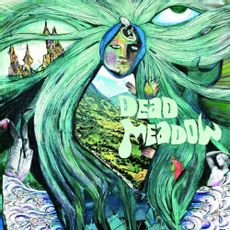