The biography of singer Fred Cole (formerly of The Weeds, Lollipop Shoppe and The Rats before Dead Moon) is like a rollercoaster ride through countless bands and musical styles beginning in the Teenbeat era of the 60s driven by an invisible force and one big love.

They cultivated their DIY code built around Fred's superstitions and avoidance of conventional music industry pitfalls. They toured around the world, played in live clubs between Oregon, Europe and New Zealand. They cut their own records and ran their own music store and label - Tombstone Music. Their story is completely unique in the pantheon of rock music; a group who never sold out, never gave in and built a legacy of art and community in a sustainable way almost unheard of. The book is a tribute to their unique aesthetic, unbelievable twisted path of a story and role as pioneers of the Portland music scene. 'Off The Grid' is a declaration of love to DEAD MOON, to music in general and to rock and roll in particular. The first two sold out US-editions of this book, first published on 2018 (DEAD MOON - The Book), are currently selling at an eye watering high price so we are now making it accessible as an affordable hardcover book (without the vinyl) for the European market. The documentation tells the entire Dead Moon saga in the words of the band itself. Editor Simone "Szim" Müller spent weeks in Fred Cole's attic sifting through photos, flyers and tour diaries, collecting posters and T-shirts and conducting extensive interviews. This third revised and updated edition contains 20 more pages than the original. The already extensive photo section now holds even more historical material, posters, flyers and, exclusive to this edition, an interview with Hans Kesteloo** as well as an extended and completed discography & gig list. 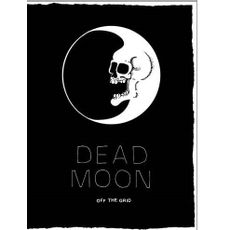