preorder any format above with "instore entry" for 2x guaranteed priority entry for you and a friend!

“DITZ are the best band in Brighton, if not the world”
- Joe Talbot (IDLES)

We have worshipped at the DITZ altar for a few years now, through their various line-up changes, developments in sound & their ‘5 Song EP‘ but now, here we are finally, with the announcement of their debut album, ‘The Great Regression‘. And holy smokes – what a f’ing incredible achievement it is!! Even those of us who came to this with the highest of expectations have been left awestruck.

Their dynamic, experimental punk is ferocious, cacophonous & urgent but complex, layered & considered, so every listen (and believe us, there have been many of them here already) will reveal something new & thrilling.

They’ve worked hard on putting this Dinked Edition together & have clearly had a lot of fun with it. What a spectacular way to bring their magnificent sound into your home!

DITZ's debut album, The Great Regression has been recorded by Ben Hampson and mastered by Kate Tavini. The 10-track album has been a long time coming – the five-piece first came together in Brighton at the end of 2015 and released their debut EP the following year. There have been a few line-up changes along the way, but they have been settled since their breakthrough tracks ‘Gayboy’, ‘Total 90’ and a cover of Peaches’ ‘Fuck The Pain Away’ in 2019, which prompted Joe Talbot from Idles to proclaim “DITZ are the best band in Brighton, if not the world”. Even though the various lockdowns slowed the band’s momentum for a while, they turned the situation to their advantage, using the downtime to fine-tune this incredible debut. Abrasive but accessible, The Great Regression is set to be one of the most important British guitar debuts of 2022. First single ‘Ded Würst’ – a ferocious mix of Gilla Band, Foals and a lyric bemoaning the moral quandary of minimum-wage employment – unsurprisingly became an instant favourite of Steve Lamacq on BBC Radio 6 Music. Other highlights include ‘The Warden’, a song all about being too intense, ironically set to an intense backing somewhere between Deftones and Mogwai, and ‘I Am Kate Moss’, which, according to singer Cal Francis, is about “the separation between your visual and personal identities, particularly within the context of masculinity and femininity”. Such themes of insecurity and gender pop up a lot over the course of the album, as well as lots of references to the human body breaking and being harmed in unnatural ways, although there’s no one overarching concept, simply because the songs have come together over such a long period of time. The title is not so much a reference to society going backwards, but more the band’s penchant for childish jokes. “Sitting in a van all day can get silly,” laughs Cal. That’s not to say The Great Regression is in any way light-hearted. It’s full of anger, rage and despair. ‘Three’ takes some text from Stanislaw Lem’s 1961 sci-fi novel Solaris and applies it to the hollow activism of everyone from big corporations to middle class uni students. Other literary touchstones include Sylvia Plath, William Burroughs and Hubert Selby Jr, but even more influential is the band’s ever-growing pile of equipment. “We spent a lot of time during the recording process just trying to make unusual sounds out of pedals, or whatever we could find,” says Cal. The album concludes with a cacophonous new version of ‘No Thanks, I’m Full’, which originally closed their debut EP in 2016. “Over the years the live version has evolved so much that we just had to record it again to do it justice,” explains Cal. “The lyrics are so old that I can’t place whether they are about the hazards of drinking or not drinking.” It’s proof of just how far DITZ have come on in that time and a reminder that, in order to progress, you need to regress. And we’ll drink to that. Or not. 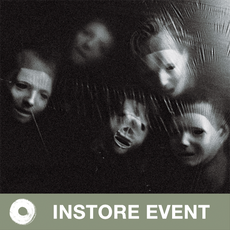 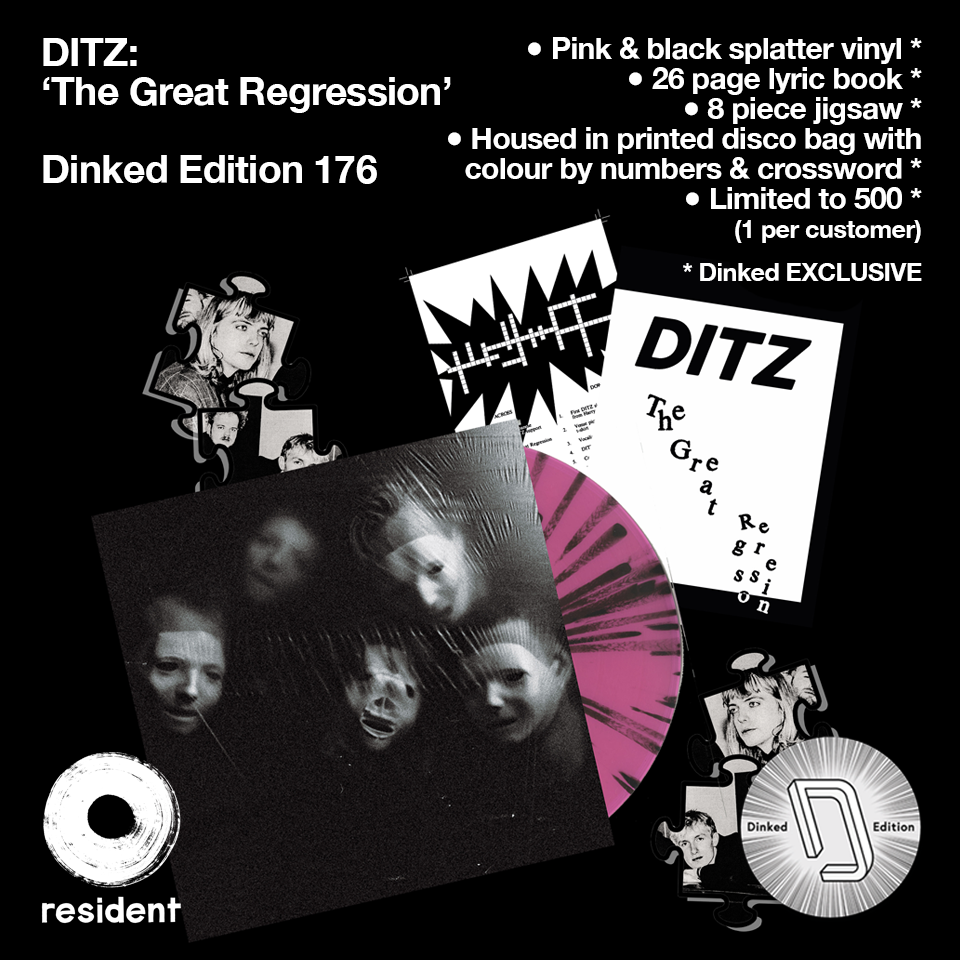 - Housed in printed “disco” bag with colour by numbers & crossword*