This 10inch vinyl disc compresses all of Curtis Gordon's rockabilly classics, enriched with a country ballad stylistically inspired by Hank Williams and written by Luke McDaniel.

In addition, two of a total of five rare songs that Gordon recorded for the Dollie label in 1959, which are considered the last recordings before his long absence. Enclosed with the record is an accompanying booklet, which contains rare photos and illustrations as well as a lot of information and a short biography and which tells the mysterious story about the two versions of the Curtis Gordon classic Draggin'. Both versions were released in 1956, but only one of them was reissued in later decades. So the ominous story of Draggin' has remained unsolved until today. We bring light into the darkness, but more will not be revealed here! 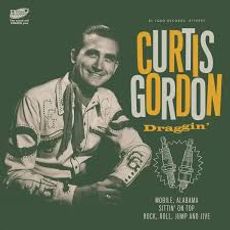