With their new album “A Diabolic Thirst”, which follows 2018’s “Infernal Decadence”, the band take their own methodology of Quebecois black metal through vicious sonic layers that culminate in six triumphant ferocious hymns where blood freezing melodies and harsh yet massive overtones bring a decadent and euphoric flow to this glorious masterwork the band have conjured. Another black metal triumph emanating from Canadian soil, one exposing once again the richness of Quebec’s unparalled black metal scene, “A Diabolic Thirst” not only captures that pure classic melodic black metal essence that was eminent in the late ‘90s/very early ‘00s but also serves its purpose as a present day release of glorious blackened magnitude. 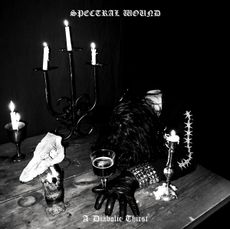