The follow up of the highly acclaimed debut album which was out on Sulatron 2 years ago! Again this album is made by these 4 musicians, including one of the most creative and prolific multiinstrumentalists in Europe: Misha Panfilov. He is famous for his (mostly) instrumental psychedelic funk singles and electronic albums by Misha Panfilov Sound Combo (Funk Night Records, USA), as well as the jazzy krautrock by Estrada Orchestra (LP Playground was released 2021 on Sulatron). Volodja Brodsky is a co-founder of the band (and Member of Estrada Orchestra) and a master on the Wurlitzer electric piano & space synthesizers. Plus Monika Erdman on electric bass and Aleksei Semenihhin on drums. Centre El Muusa is an Estonian psychedelic rock quartet founded in 2018 (previously named as Centre Electronique Muusa). The project, which started as an avant-garde electronic duo of Panfilov and Brodsky in 2015, developed into a rock band, when it was joined by Erdman and Semenihhin. Gradually, the band transformed their sound from uncompromising garage krautrock to more spacious psychedelia with noticeable elements of ambient and country-rock, while maintaining their signature lo-fi approach to recording and not avoiding risks. Recorded and produced by Misha Panfilov. Mastered by Jörgen Hermaste. Live bonustracks taken from the Sunrise Concert at Aidu Windmill Park, September 2020. 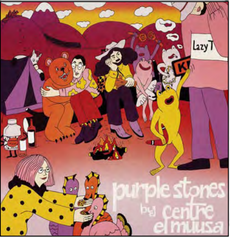