the new album from Texas-based progressive deat/black metal band HAUNTER is the follow up to 2019’s acclaimed “Sacramental Death Qualia” (named as Stereogum’s 2019 metal album of the year) which will unveil HAUNTER as one of the most enlightening and dynamic bands and one of its pioneering prospects within the current movement.

With “Discarnate Ails” HAUNTER have tapped into the next level unparalleled with their most complex, advanced, and their most furious and heaviest release to date. The three epic chapters that comprise “Discarnate Ails” weave through intricate, dissonant and vitriolic passages that find the notable balance of challenging melodious movements and parts while maintaining the band’s sense of creating epochal songs of triumph and mastery. 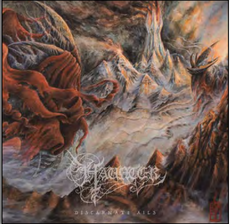