A BIG DATE WITH TOMMY SANDS, THE DRUGSTORE'S ROCKIN'


Bear Family Records collects on this CD all the great rockers and teen rockers he recorded for Capitol Records.

Capitol Records was in the enviable position of having two challengers to Elvis’ regal status in 1957: Gene Vincent, who may have appeared just a little too threatening for full‐on mainstream embrace in the states, and the more clean‐cut Tommy Sands. He was no mere teenage idol; Tommy really did possess the vocal chops to convincingly rock, as he proves throughout this jam‐packed compilation. TOMMY SANDS A Big Date With Tommy Sands The Drugstore’s Rockin’ RELEASE DATE: 13 MAY, 2022 LABEL: BEAR FAMILY CAT NUMBER: BCD17543 FORMAT: CD w/ BOOKLET PRICE: £ 8.99 GENRE: VINTAGE ROCK’N’ROLL, ROCKABILLY, POPULAR, TEEN BARCODE: 5397102175435 Although it seemed that Sands burst upon the scene like a hydrogen bomb with his early 1957 smash Teen‐Age Crush, he’d actually been recording since 1951, initially as a pubescent country singer in Houston, before he and his mom moved to Los Angeles to properly break into show biz. Tommy’s records actually got tougher as time went on; his incredible ’58 album ‘Sands Storm!’ rocked like crazy (his cover of The Clovers’ Hey, Miss Fanny sported a jaw‐dropping guitar solo that was likely the work of Joe Maphis). Once he hooked up with The Raiders who later became The Sharks and led by guitarist Scotty Turner, Sands really got down to rocking business on Blue Ribbon Baby, The Worrying Kind, and Wicked, Wicked Woman. You won’t find any of Sands’ sedate pop crooning on this collection—it’s non‐stop rocking from first track to last with the exception of Teen‐Age Crush and three great mid‐tempo songs! 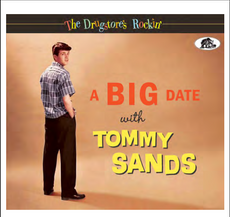