Follow us Follow us
Home  | courtney barnett - sometimes i sit and think, and sometimes i just sit


we didn't think it was possible to fall for this super-talented aussie any harder than we did when we first heard her back in 2013 but flippin' heck - she's gone & blown our minds with this one.

being billed as her debut album proper (apparently merging 2 eps together didn't count as a debut?), all concerns about her "going mainstream" now she's grabbed the attention of the wider world are instantly dispelled. she has in fact made a rawer, rougher & louder album than we could have hoped for. it brings Barnett's incisive vision into stark, unflinching focus; her wit sharpened to a knife edge, her melodies more infectious. Mixing witty, often hilarious observations with devastating self-assessment over a beguiling collection of songs, she's brilliantly literate without being pretentious. the voice of a generation & one we'll happily have represent us, thanks. natasha recommends: it's so rare that an artist grabs my attention lyrically but this aussie lady is a rare exception. coupled with her raw grungy-guitar, her primal reaction to modern life is really captivating.

derry recommends: the best lyricist in rock right now but crucially paired with the music to back it up. who thought anyone could make grunge sound so effortlessly clever? 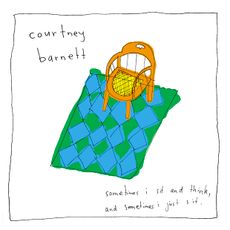