the sororal trio have proven no easier to resist on this third album of retro-made-modern rock-pop that seems tailor-made for having the most glorious summer imaginable.

rostam & Ariel Rechtshaid returned to the production desk, alongside danielle haim & evidently knocked it out the park once again! Standout tracks include 'The Steps', which pushes guitar to the forefront in a way the band has not done before. Clean, chorused electric guitar, overdriven lead lines, and strummed acoustic 12-Strings lock in together wonderfully. The breezy & beautiful 'Summer Girl', poignant reflective ballad 'Hallelujah' and emotionally charged 'Now I'm In It' are all gems. “By breaking from what the world might expect from them & letting themselves do whatever the hell they want, they have produced a record that’s experimental, soothing & vulnerable; it’s a thing of great beauty” 5/5 – nme. 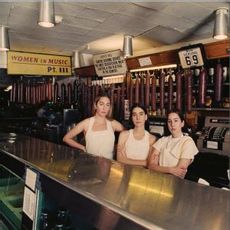