Volume 2 of sturgill’s “bluegrass bender” is like a supercharged version of its predecessor – the tempo is doubled, the dulcet string plucks ring all the sweeter and the sense of wellbeing is all the more heart-swelling.

Simpson reunites with an A-Team of acoustic musicians — now dubbed “The Hillbilly Avengers” – to once again revisit and reinterpret his catalogue. December 11, 2020 – Nashville, TN – Sturgill Simpson has released his second surprise bluegrass album in two months: Cuttin’ Grass’ Vol 2 – The Cowboy Arms Sessions (Vol 1 released in October). Produced by David Ferguson, Cuttin’ Grass Vol 2 is out now digitally on High Top Mountain Records via Thirty Tigers/The Orchard. Vinyl preorder available now for release April 2, 2021. Listen to Vol 2 HERE But going back into the studio so quickly after releasing Volume1 didn’t mean simply repeating a formula. “On Volume 2, we recorded everything I was too afraid to do on Volume 1,” says Simpson. “It’s hard to deny that this is a much more personal record. I was thinking about my kids, my grandfather, my wife.” 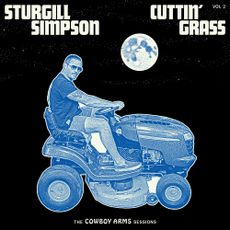