The Brooklyn art-punk incendiaries’ debut was one of our fave releases of 2018 & their irresistible grooves, punchy post-punk, angular guitars, bright hooks, tongue-in-cheek humour & whip-smart wordplay smashed it for us again this year.

They treated us to one of our fave instores too.

a little guitar heroism here, a dash of raucous melodic hook-mongering there, & you’ve got another smashing album of addictive art punk from this sensational jewel in the new York music scene’s crown.


The follow-up to the band's acclaimed debut album, Endless Scroll (2018), and 2019's Shiny New Model EP, Broken Equipment was inspired by a book club. In the early months of 2020, the Brooklyn art-punk incendiaries gathered together with close friends to study the works of a wide range of philosophers. Passionate debates lasting long into the night became a regular occurrence, motivating the band to become as ideologically unified as the weighty tomes they were reading. Broken Equipment is BODEGA’s attempt to interrogate the external factors that make them who they are, propelling existential quandaries with tongue-in-cheek humour, highly personal lyrics, and irresistible grooves.

Since BODEGA’s formation in 2016, Ben and Nikki (who previously played together in the band BODEGA BAY) have experienced a rare meteoric rise. The duo double as filmmakers, earning acclaim for their 2020 erotic drama PVT Chat starring Peter Vack, Julia Fox, and other recognizable faces from the Safdie Brothers’ cinematic universe. When the pandemic forced them to hit pause, they used the opportunity to regroup with drummer/performance artist Tai Lee, bassist/book club leader Adam See, and lead guitarist Dan Ryan. Broken Equipment was produced by Ben himself with Bobby Lewis, BODEGA’s NYC live sound mixer. The record was mixed by Bryce Goggin, whom the band sought out for his work with Pavement, and Adam Sachs (WIVES).

The album’s 12 songs are set in present day New York City, packing in references to contemporary issues of algorithmic targeting, media gentrification, and the band itself. On 'NYC (disambiguation)', they break down how the Big Apple was “founded by a corporation” and history remains alive in the present. The poetic 'Pillar on the Bridge of You' is the first love song Ben ever wrote for Nikki, while 'All Past Lovers' gazes back to the “southern belle” and “chat room suitor” who still live inside him today.

To accompany the propulsive pace of 'Statuette on the Console' and its lyrics about switching perspectives, Nikki recorded alternate versions in eight different languages. “I used God in that song as this arch overlord character, but it could also be a real estate developer,” she explains. “It’s about anyone who puts their reality on your back and forces you to carry it around.” In that song, Nikki also wryly states that although she doesn’t have faith in this particular “God,” she is still “living life with (my) platitudes.” On 'Territorial Call of the Female', Nikki playfully quips that “when the man is around that’s when I’m putting you down,” highlighting how in the past she unknowingly reinforced patriarchal values by turning against other women to attract men. It’s moments like these where BODEGA most exemplifies their self-professed motto that “the best critique is self critique.”

As the band’s art director, Nikki commissioned the sculpture featured on the cover of Broken Equipment as a companion to the cover of their debut, Endless Scroll. “They’re in the same world,” she explains. “The Endless Scroll sculpture was kind of shaped like a computer but also a gavel that a judge would have. That album was about how we do not yet know in the information age what technology is doing to our brains. It was almost on the precipice of a judgement. Now, with the pointing finger machine on the cover of Broken Equipment, I wanted to convey the sense in which social media and Web 2.0 turn people who would otherwise be allies against each other.” 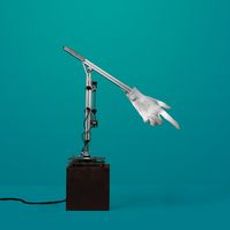 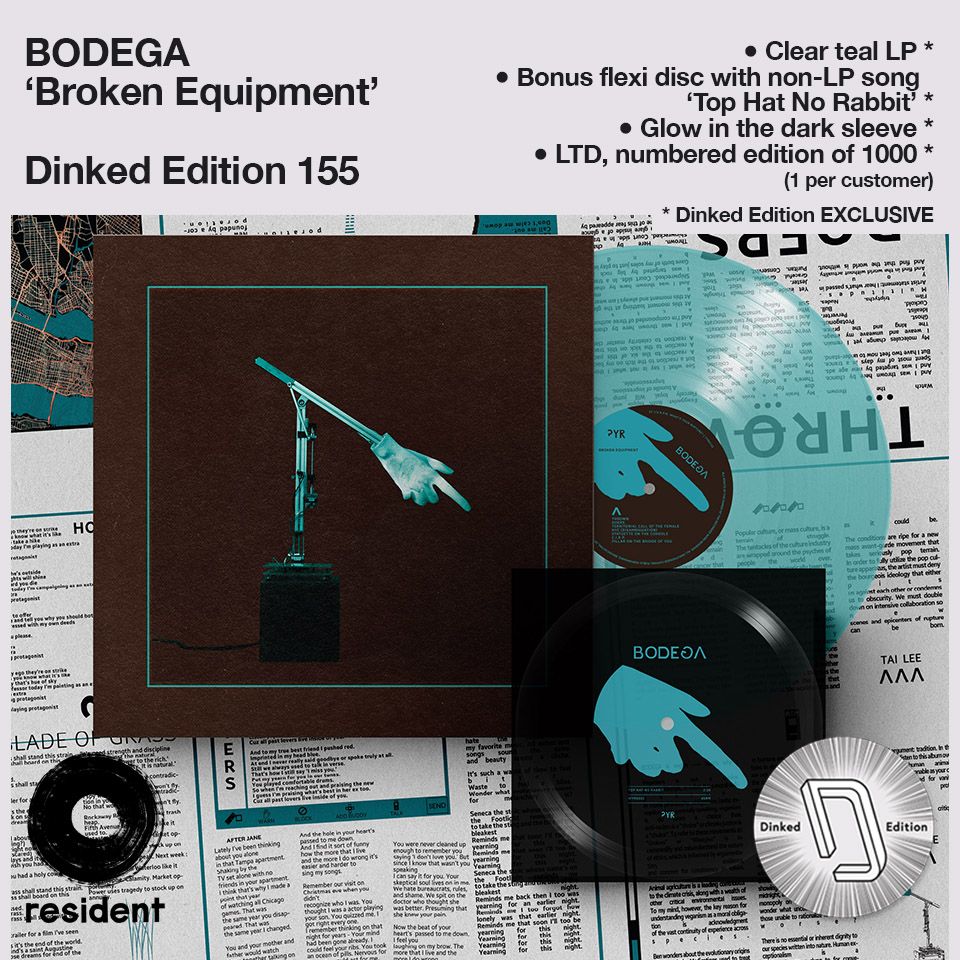 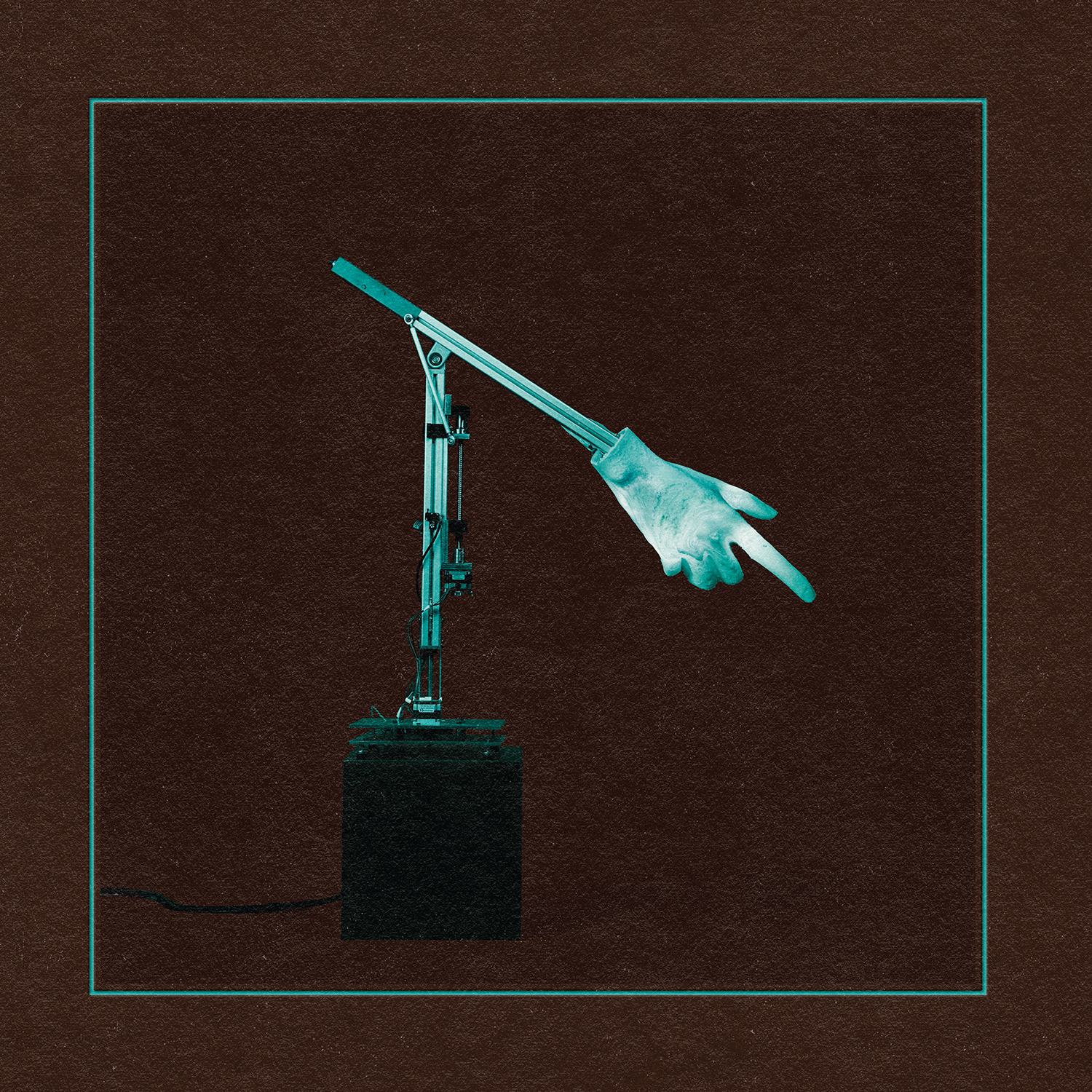 - Glow in the Dark Alternate Sleeve *