Blue States returns with a fine collection of music, up there with the best of his work that blends soundtrack and song to brilliant effect.

World Contact Day arrives six years after the previous Blue States album, written and recorded partly at Dragazis' Lightwell Recordings studio in Hackney featuring a combination of instrumental soundscapes and vocal songs that draw from influences as diverse as world as Morricone, Vangelis, Beak, Broadcast and The Carpenters. Songs on the new record feature guest vocals from the likes of Giampaolo Speziale and Federica Caiozzo of the Italian band, Malihini, English folk-musician, Rachael Dadd and Miami-based Allison May-Brice (The 18th Day Of May, Lake Ruth). Written under the backdrop of claustrophobic uncertainty and grief, Dragazis wanted to make an album of expansive escapism whilst also grounding musically in a more live approach than previous albums. 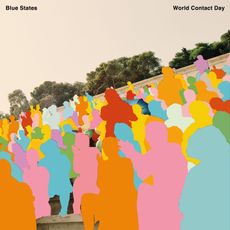