Sulatron Records is happy to release the ultra spaced out cosmic drone jazz album by one of Estonia's finest bands.

This album is a complete spaced out Improvisation which could have been performed by the spirits of Sun Ra, John Coltrane and early Tangerine Dream. ESTRADA ORCHESTRA formed of vinyl diggers, street performers, djs and classically trained musicians and started out as a spontaneous jam band in 2013. Their mix of repetitive funk rhythms of Bohannon and free jazz of Ornette Coleman developed into more spacey and krautish music. They released 4 longplayers so far and a few singles. The latest album “Zucker Tanzclub” was a nice hit in the scene and sold out fast. Two of their members, Volodja Brodsky and Misha Panfilov, are also members of CENTRE EL MUUSA. Sulatron released their debut LP and will do their second one also, later this year. 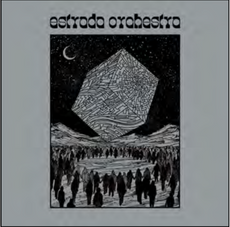