Fingers Crossed: How Music Saved Me from Success


A tender, fierce, uncompromising reflection on the power, peril and energy of youth, and how childhood lingers longer than you’d ever expect it to when you’re young.

Berenyi’s memoir is an engaging read that feels like she’s with you, discussing her life in real time, inviting you in to some immensely personal, witty and insightful observations on everything from difficult family situations to touring with Lollapalooza to Britpop. It doesn’t matter if you’ve followed lush since they began or have never heard a note – Berenyi’s book is unputdownable from the first page to the last.

The extraordinary and searingly honest personal story of musician Miki Berenyi, revealing the highs and lows of navigating the madness of the '90s music industry. Formed in 1988, Lush were part of the London gig scene during one of the most vibrant and creative periods in UK music. Now, Miki Berenyi tells all. The book begins with her childhood of extremes. From the bohemian lifestyle of her father's social circle to the privileged glamour of her mother's acting career, Miki's young life was a blur of travel, celebrities and private schooling. But frequent relocation, parental neglect and the dark presence of her abusive grandmother resulted in crippling shyness, mental-health issues and a vulnerability to exploitation. The route out of this hole was music - a passion shared by schoolmate Emma Anderson. The teenagers began attending gigs together and would eventually go on to form Lush. Peppered with anecdotes involving a cast of hundreds (including Blur, Sean Connery, Tracey Emin, Pearl Jam and the Red Hot Chili Peppers), this uncompromising autobiography documents Lush's thrilling rise, dispiriting fall and subsequent bounceback, reliving the tours, recording sessions and problematic managers they experienced along the way. But at the heart of the book are Miki's own battles: the conflict between her mouthy public persona and her thin-skinned private identity; the trials of being a woman in an infuriatingly male world; the struggle to find a middle ground between safe indie obscurity and sellout international success. The memoir also explores Miki's complex relationship with Emma - one that has fluctuated between camaraderie and rivalry over the years - and addresses the most devastating tragedy of all: the suicide of her soulmate, Lush drummer Chris Acland. Told through frank confession, wry humour and emotional honesty, this is the incredible tale of a trailblazing woman and a seminal band. 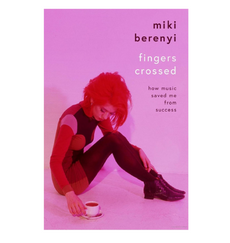