• Featuring the classic line-up of Mark E Smith alongside Steve Hanley (bass), Craig Scanlon (guitar), Karl Burns (drums), Paul Hanley (drums) and Marc Riley (guitar). This six-disc box set brings together those two classic albums alongside a host of John Peel sessions, Kamera singles, live performances and the group’s live album ‘In A Hole’, recorded during their tour of New Zealand and originally released on Flying Nun Records. Also included in the box is a replica poster from the August 1982 show at the University of Canterbury in Christchurch, New Zealand and a replica press-release for ‘Hex Enduction Hour’. Founded by its only constant member, Mark E Smith , The Fall formed in Manchester in 1976 and were one of the most prominent post-punk groups in the world. Musically, there may have been several stylistic changes over the years, but it was often characterised by an abrasive guitar- driven sound and frequent use of repetition, always underpinned by Smith's distinctive vocals and often cryptic lyrics. ‘Hex Enduction Hour’ was the fourth studio album by The Fall, building on their lo-fi production and featuring a two-drummer line-up. The album was recorded in Reykjavik, Iceland and Hitchin, Hertfordshire. ‘Room To Live’ was the fifth studio album by The Fall and was Marc Riley ’s last album with the group. ‘In A Hole’ was recorded at the last show of the group’s 1982 tour of Australia and New Zealand, at Mainstreet Cabaret in Auckland. 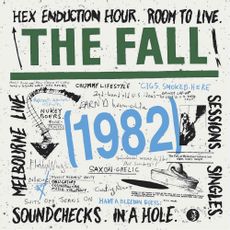 2 JAWBONE AND THE AIR-RIFLE

9 WHO MAKES THE NAZIS?

4 WHO MAKES THE NAZIS?

12 AND THIS DAY (REVISITED)

2 THE MAN WHOSE HEAD

5 LIE DREAM OF A CASINO

4 NO XMAS FOR JOHN QUAYS

9 WHO MAKES THE NAZIS?

4 LIE DREAM OF A CASINO