Zappa ’75: Zagreb/Ljubljana features the best performances of the Yugoslavian concerts sequenced in the exact order of the show’s setlist to present the crème da la crème from each night for the first time ever.

Produced by Ahmet Zappa and Zappa Vaultmeister Joe Travers, the 27-track live album boasts nearly two and half hours of completely unreleased music and will be available on 2CD complete with a 32-page booklet filled with photos of the era and lineup by Gail Zappa and John Rudiak with insightful liner notes from Travers, an interview between him and recording engineer Davy Moire who recorded the show and worked with Zappa from 1975-78, plus a firsthand account and illustration from drummer Terry Bozzio. Previously the only recording ever released from these concerts was a performance of “Black Napkins” from Ljubljana included on the 1996 release, Frank Zappa Plays The Music Of Frank Zappa: A Memorial Tribute; the version of “Black Napkins” featured here is from Zagreb. The details surrounding the concert’s recordings are unknown but somehow it was organized that the shows were semi-professionally recorded. Despite Zappa usually touring with his Scully ½” 4-track recorder that machine was not used and instead the Zagreb and Ljubljana shows were recorded on an obscure format of ½” 8-track. After painstakingly baking the tapes and running multiple passes, the tracks were successfully transferred and have all been re-mixed by Craig Parker Adams at Winslow Ct. Studios and mastered by John Polito at Audio Mechanics, who both also aided in restoring the audio as needed. One notable exception is the track “San Ber’dino” from Ljubljana which somehow wasn’t captured on the 8-track master and so the line mix from Zappa’s Nagra tape was used. Zappa arrived in Yugoslavia on the heels of releasing Bongo Fury, his collaborative album with Captain Beefheart released in October. While several songs from the record were included in the setlist, such as souped-up versions of “Advance Romance,” “Carolina Hard-Core Ecstasy,” and “Muffin Man,” Zappa treated the audiences to songs from his then already expansive catalog, from “I Ain’t Got No Heart,” “How Could I Be Such A Fool” and “I’m Not Satisfied” from The Mothers Of Invention’s 1966 debut, Freak Out!, and a three-song suite of songs from 1968’s We’re Only In It For The Money (“Lonely Little Girl,” “Take Your Clothes Off When You Dance,” “What’s The Ugliest Part Of Your Body?”) to 1973’s Over-Nite Sensation standouts “Camarillo Brillo,” “I’m The Slime,” and “Dirty Love,” plus tracks from 1974’s Apostrophe (‘) and 1975’s One Size Fits All. One of the highlights of the album is the improvisational instrumental jams of the concert, specifically “Chunga’s Revenge” and “Zoot Allures,” which Zappa used as a palette to experiment with soloing and bounce new riffs off the band in real time. Here we get to hear works in progress such as the embryonic versions of “Filthy Habits,” (1979’s Sleep Dirt), “Five-Five-Five” (1981’s Shut Up And Play Yer Guitar) and “Wind Up Workin’ In A Gas Station” (1976’s Zoot Allures). In addition to experimenting with new ideas, Zappa also used the opportunity to preview more fully fleshed out compositions such as early versions of his signature songs, “Black Napkins” and “Zoot Allures,” which would end up on the album of the same name the following year. 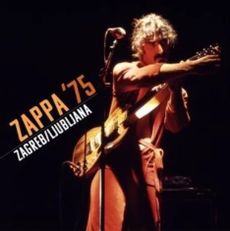