released in 1983, ‘speaking in tongues’ was the band’s fifth studio album & became their commercial breakthrough.

talking heads found a way to open up the dense textures of the music they had developed with brian eno on their two previous studio albums for 'speaking in tongues', & were rewarded with their most popular album yet. ten backup singers & musicians accompanied the original quartet, but somehow the sound was more spacious, & the music admitted aspects of gospel, notably in the call-&-response of ‘slippery people,’ & john lee hooker-style blues, on ‘swamp.’ the accompanying music, filled with odd percussive & synthesiser sounds, could be unusually light & bouncy. 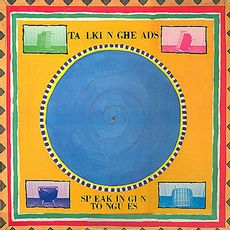