In 1976, Frank Zappa played four historic sold-out concerts at The Palladium in New York City the week between Christmas and New Year’s.

These thrilling shows – described by band member Ruth Underwood as “theatrical, outrageous and raucously funny, but also filled with startling and gorgeous music, dating from Frank’s 1960s output to literally the moment the curtain went up”— served as the source material for the live double album Zappa In New York which was constructed from the best-played performances with overdubs later recorded in the studio. In celebration of its eventual release in 1978, Zappa In New York will be released on March 29 via Zappa Records/UMC as a suite of expanded anniversary editions to commemorate the album’s recent 40th anniversary. Overseen by the Zappa Family Trust and produced by Ahmet Zappa and Vaultmeister Joe Travers, the expanded versions will be available as a 5CD box set and 3LP 180-gram audiophile grade vinyl. The 5-disc collection, which will be housed in a limited-edition metal tin shaped like a NYC street manhole cover and includes a replica ticket from one of the shows, consists of the main album in its original mix, newly remastered by Bob Ludwig in 2018 and available for the first time since its debut. The four additional discs are loaded with relevant Vault nuggets and more than three hours of unreleased live performances from the NYC Palladium concerts, representing every composition played during the concerts and the best alternate performances of every tune Zappa picked for the original album, all newly mixed in 2018. To achieve the highest-level sound quality, the audio team went back to the original two-inch 24-track multi-track master tapes and transferred every reel at 96kHz 24-bit wavs. The 3LP set, pressed at Pallas in Germany, features all-analog mastering of the original album mix, unavailable since first issued. Plus, an additional LP of select bonus content from The Vault. 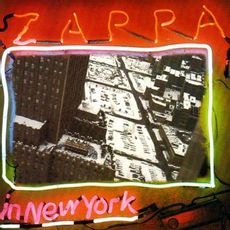