Murder of the Universe


the king gizzard machine shows no sign of burn out – on the contrary, this truly epic sprawl of an album crashes into a new cosmic universe of occultist vibes and truly spooked jams.

Broken down into three movements, the album concerns itself with no less than the downfall of man and the death of the planet. These dudes seem to have fully crossed into that zappa/sun ra arkestra ethos of constant playing, writing, jamming, and performing – a movement, more than a band – and this is some of their most ambitious and exciting music yet. for oh sees and goat fans not yet familiar it is the perfect time to get thee immersed. “An intense, ingenious and utterly insane listen, Murder Of The Universe is another brilliant addition to King Gizzard's already stellar and ever-expanding discography” 8/10 - clash 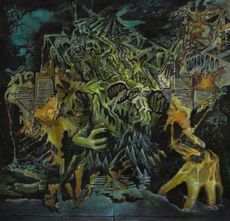