this 2cd SET CONTAINING hiS LEGENDARY CANADIAN BROADCAST SHOW FROM 1983 finds him in fiery form in the midst of his tour off the back of ‘let’s dance’.

Already a successful artist, in 1983 David Bowie released his 15th and bestselling album to date, ‘Let’s Dance’, which would go on to reach platinum status. It contained three of his most popular singles, including the title track, which reached No.1 on the US and UK charts, as well as ‘Modern Love’ and ‘China Girl’. in support of its release, Bowie and his band embarked on the 93-date ‘Serious Moonlight’ tour which visited 15 countries and attracted more than two million ticket sales, thus becoming his biggest live jaunt to date. 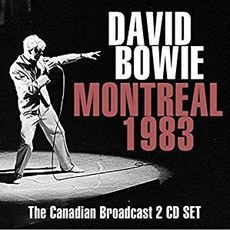