Follow us Follow us
Home  | books  | jimi "soni" sonefeld - swimming with the blowfish: hootie, healing, and one hell of a ride

Swimming with the Blowfish: Hootie, Healing, and One Hell of a Ride


Swimming with the Blowfish is the definitive account of the rise, fall and rebirth of the band that offered an irresistible alternative to the grunge music of the early ’90s.

Hootie & the Blowfish were formed in 1989 at the University of South Carolina. The quartet was distinguished by the soulful voice of Darius Rucker and powered by the author of this evocative autobiography, drummer and leading songwriter Jim ‘Soni’ Sonefeld. Their debut album, Cracked Rear View, became one of the best-selling in the history of rock music and the band went on to win two Grammy Awards, whilst playing some of the biggest venues in the world. Success saw them traveling the globe, but it came at a price. Swimming with the Blowfish, although primarily ‘Soni’ Sonefeld’s personal story of despair and redemption, also shines a revealing light on this much-loved band’s incredible tale. 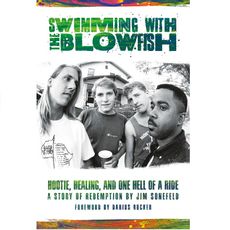